Born in Portogruaro – VE in 1957, Saturno Buttò studied at the Liceo Artistico and at the Academy of Fine Arts in Venice, graduating in 1980. His work is characterized by a very personal formal interpretation of European sacred art and by a technical expertise impeccable, reminiscent of those of the great masters of our pictorial tradition.
In constant conflict between eroticism and pain, transgression and ecstasy, Buttò’s precious wooden paintings “dissect the Western” religious iconography ‘s uncompromising and contradictory view of the body, exhibited on the one hand as an object of veneration, denied on the other in its value as pure erotic beauty. The result is a fascinating tension that highlights, above all, the human figure, which has always been at the center of the scene in his work. Buttò, after more than a decade spent in his studio perfecting the oil technique, began his exhibition career in 1993, the year in which his first monograph was also published: “Portraits from Saturno: 1989-1992”. Since then, numerous solo exhibitions have followed in Europe, Asia and the United States. He subsequently published four other monographic catalogs: ”Opere 1993-1999” and “Martyrologium (2007) as well as” “Saturnicore (2013)” and “Breviarium Humanae Redemptionis” (works from 2007 to 2014) The artist lives and works in Bibione in the province of Venice.

1. Saturno, what makes you choose a personality for your work: admiration or fascination? What captures your interest?

Two aspects have always characterized my choice of models. The first is the search for them on the basis of the need dictated by the subject of the picture. To give an example, for a panel depicting a well-defined subject with several figures, it is essential that the models have certain characteristics, so it is my care to choose those that come closest to the required needs. The second aspect, on the other hand, is based precisely on the fascination that a potential model is capable of transmitting to me. Of course, I do not consider beauty as a purely superficial datum, but I am attracted by the totality of the person’s peculiarities. And for me, it is essential to know these before considering a collaboration. But even though it rarely happens to me that I meet a person I don’t know, I may want to portray them by sensing a certain personality from them. The common denominator, however, is feminine beauty. I have always admired women with a strong personality, who are able to express elegance and style even with little means.

2. Oils. An explosive technique. What materials and techniques do you use?

Today, I still believe that oil paint is the only technique capable of visually realizing my imagination. The power and depth of oil is unsurpassed. My working method has no particular secrets. Let’s say that the most characteristic aspect is undoubtedly the use of the table instead of the canvas as a support. The table is then completed with the design of a background based on “Bolognese chalk”. This choice is certainly decisive for the character of the work, due to the particular texture that is formed, completely different from the surface of the classic canvas. For the rest, I use the oil paint, as is the tradition, diluted with linseed oil and white spirit, and apply it with the brushes “body and glaze”, according to the needs of the moment. Of course, the very well defined design at the base.

3. I cannot stop admiring “Lo Svenimento Santa Caterina.” Describe this work as you never have done before.

This painting was born after I saw the work “The Fainting of Santa Caterina” by Antonio Bazzi known as Sodoma (c. 1526) in Siena in the church of San Domenico. I like the position of the bodies around the figure of the saint. The caring for the other, the love and compassion that the painting conveys. My version differs stylistically, but still wants to convey the same emotions and feelings, albeit in a more carnal key. I think the motif represents well what is a bit of a contradiction to Christianity, a theme that has always interested and inspired me. That is, this quest for mystical asceticism through physical suffering. The constant mortification of the flesh to which the Catholic-Christian religion has accustomed us has, at the very least, disturbing aspects that I very often identify as elements of an “unspoken eros” And it is this continuous and subtle balance between sexuality and spirituality that inspires me and is perhaps the basis of all my artistic research.

4. Where does your inspiration come from? What are you trying to convey in your paintings?

In part, my work is a kind of pictorial diary. The pictures mark stages of my life through portraits. The attraction to the human species is also my desire to identify myself through the other. However, I want my works to reveal human nature with all its weaknesses and contradictions through beauty.

5. In your opinion, when does a work of art become important?

If he succeeds in conveying a strong message with ease, it means that the work has succeeded and could become important, relatively speaking.

6. Your approach to portrait painting is often described as the unmasking of the subject’s personality to go beyond what people see at the first glimpse. How does that process work?

I am convinced that when a particular work is born of a deep and authentic creative need, it carries within it various levels of reading. But the author does not always have the keys to unlock them. So I think this is, at least in part, due to a kind of automatism. “The Thing Happens!” I can say from experience that my “works happen” and they also surprise me without my immediately understanding their meaning.
It is only afterwards that the signals reveal themselves, which are actually beyond the picture, or they are the combination of several elements that are present in the picture but not quite determined.
It also happens that there is no explanation for the phenomenon. Nothing bad, the mysterious is always an added value.

7. Is it important that your art feels alive in some way?

Yes, in some way it must be able to evoke the spirit of the subject. That’s why I spend so much time on attention to detail. Hoping to avoid hyper-realism that way.

8. The world around you has changed a lot over the years. Today painters and art stand for a different thing than they did 30 years ago. Make a reflection for our readers.

Yes, of course the world is changing, and changing fast; it would be strange if it weren’t. And an artist should not only accept the changes, but anticipate them! But it still happens that the painter’s profession betrays the artist. Let me explain: Very often the person who has a good pictorial technique simply demonstrates how good he is, without caring what he paints. This is the reason why figuration is very often excluded from great artistic events.
Rightly so, I might add. However art “creates things” and painting and sculpture are “primary exercises”, there will always be those who are able to create new art through these disciplines. 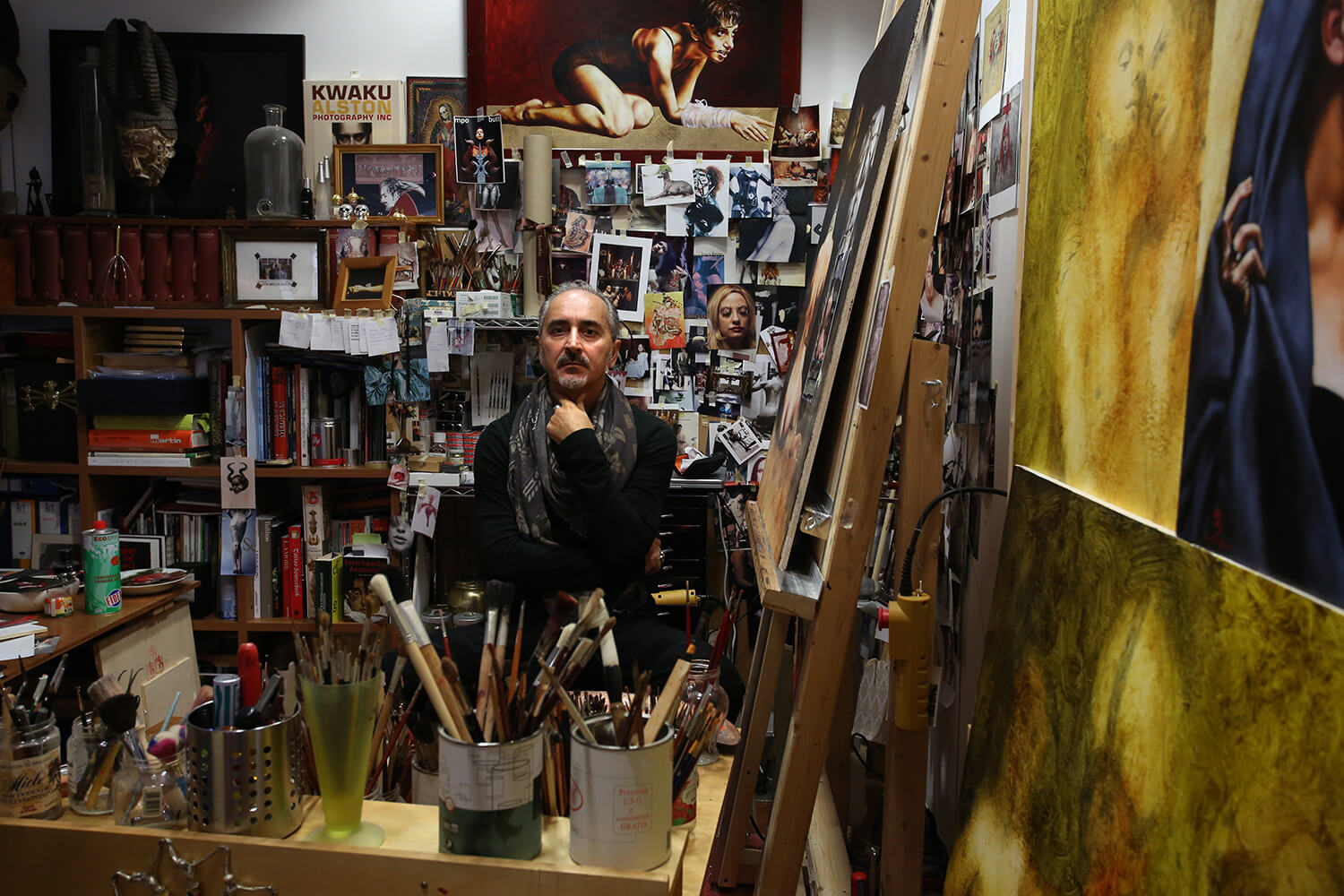